Giafrese does Spring Break? Oh hey! Well, sort of. Work has been great, but three months of working practically night and day, every day, well, it starts to get to you. This winter has been a nightmare of sunless days and endless snow, so a little beach time was in order.

I’ve never been to Cancun, so I thought, why not. There are cheap flights direct from New York City, and I found an amazing deal on a direct flight that I couldn’t pass up. 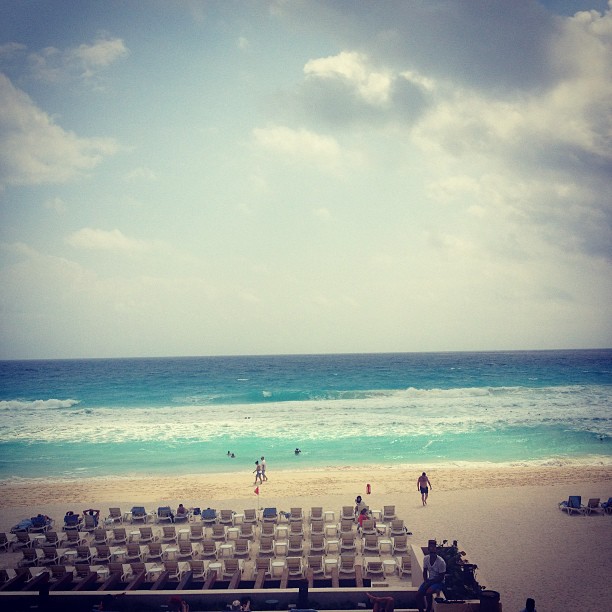 view of the beach from the hotel

So next up was the hotel. Now, most people think Cancun is just spring breakers and wild college kids, and I found that to be the case with the majority of the accommodations I was looking at. And, no hate, but that’s not really what I wanted. Having done a lot of “college travel” in hostels and budget accommodations, this time I wanted to travel like an adult.

Which led me to Secrets The Vine. Opened in August of 2012, the place was designed to be a contemporary take on the traditional Mexican hacienda. And whoever designed the place, well, let’s just say they’re incredible. Words can’t really capture the whole effect of the place, but I’ll try.

Entering into the hotel you first notice the friendly service. And not just “friendly” — this is actually, honest-to-goodness friendly. I live in NYC and as a result can smell insincerity from a mile away, so this was definitely a great start to the stay. And as a note, I generally don’t like service on a grand scale — it just makes me feel uncomfortable. However, at Secrets, even with the incredible amount of staff working, I never once felt overwhelmed or uncomfortable. Just entirely taken care of. Which is great.

Once your car pulls up your luggage is whisked away and you enter up a grand, sweeping staircase and you’re in the lobby. Calling it a lobby is a bit of a disservice, as it’s a grand space with soaring ceilings and lots of marble. Very fancy! But, going back to that idea of the hacienda, you actually feel very at home and comfortable. Nothing felt “off limits,” and there were a variety of areas to lounge about in oversized furniture, including one area with a fireplace. Yep, a fireplace in Cancun — and as odd as it might sound, it was actually the perfect touch. 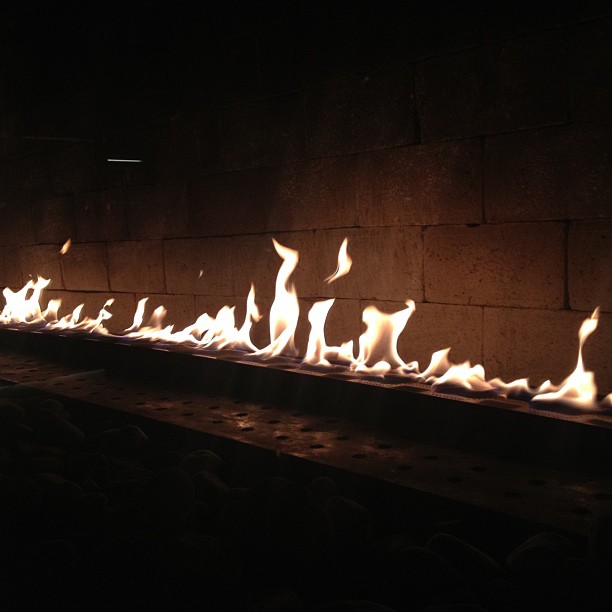 I arrived at 9am, which could’ve been really inconvenient as checkin isn’t until 3, but I left my luggage with the desk and was able to just hang out on the patio. Perfection.

When I was finally able to check in, they told me I had been upgraded to a junior suite. Oh hey, no complaints here! I wish I had a photo of my face, because my jaw was on the floor — the room was easily three times the size of my apartment. You enter into a small foyer area, which is perfectly set up for luggage and leads directly to two large wardrobes, with shutter style doors and an automatic light so there’s no need to get dressed in the dark. Not that you really need to worry about that, as there’s a ridiculous lighting set up — touch a button and the lights dim to a variety of pre-set moods, or you can set it yourself.

The bathroom is all glass and bright lights, and was something out of a magazine. The shower actually separates the living room and bathroom, and while I’m not really a fan of this kind of feature since it’s kind of awkward bathing in the living room, the treatment on the glass actually makes you feel like your privacy is maintained. Very nice — which also means it’s not weird when you leave the door to the terrace open, since you’re covered. 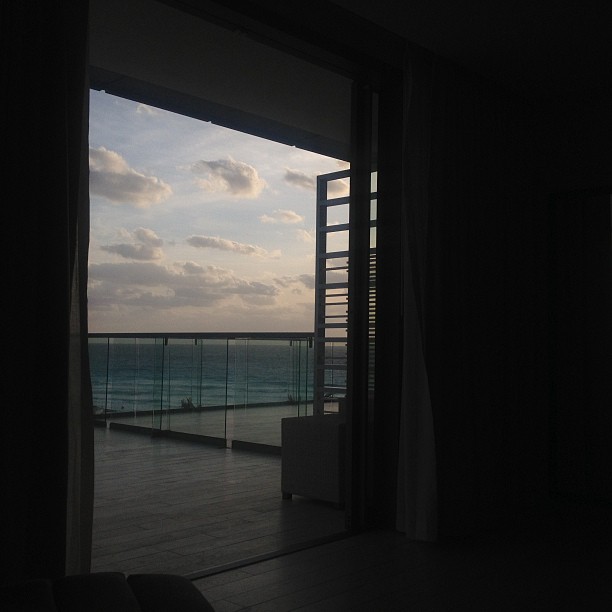 view from bed onto the terrace

Now let me talk about the terrace. Because it’s supposedly a “balcony,” but this thing was literally the size of my apartment. Not even exaggerating. I was in room 1006, and had amazing views out over the water, and of the next door resort. Now, I believe it’s only the rooms on this floor that have such a big space, which is kind of a tradeoff as this is also the lowest floor — rooms higher up have sweeping views of the entirety of Cancun in either direction. Either way, I had an amazing view literally from bed, and left my door open as much as possible so I could take in the sounds of the crashing waves. Talk about bliss. 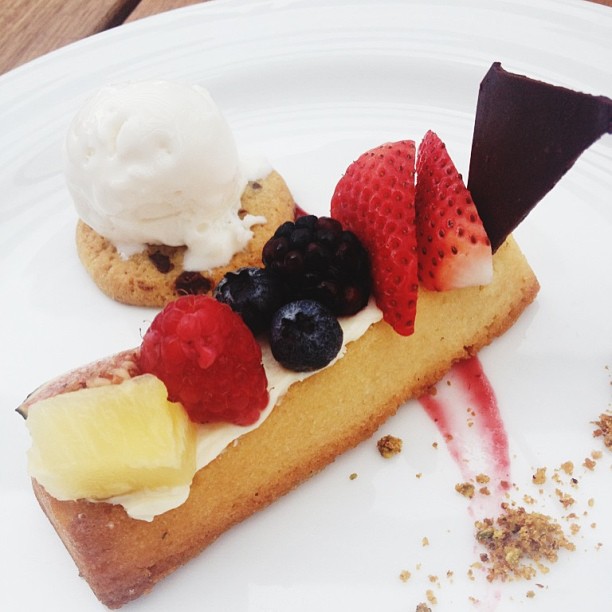 There are a variety of restaurants, and while I won’t go into them all, I have to say my two favorites are the breakfast buffet in the morning, and the Sea Salt Grill. The breakfast was beautifully presented and wildly delicious, and as you can see in the video, there was a little bit of everything. Sea Salt Grill is located on a terrace overlooking the pool, and was just the perfect atmosphere for what I was looking for on this trip. Relaxed, beachy, chic. The food is delicious, and while I’m not normally a steak person, if there’s steak on the menu — get it. So delicious. 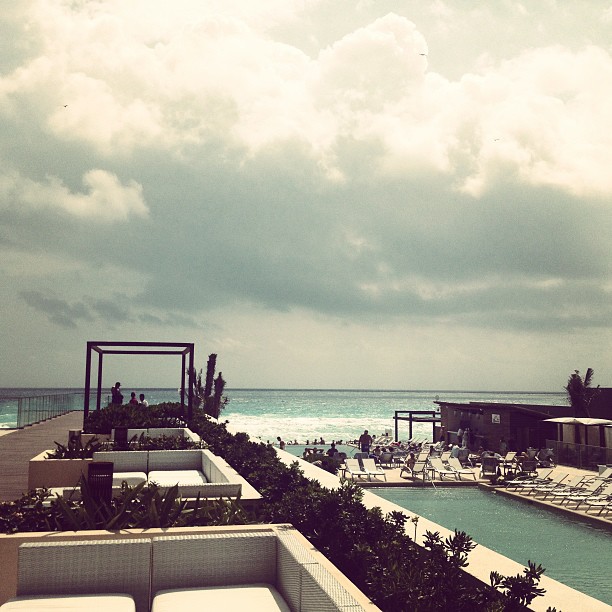 views over one of the pools

There are three different pool areas on the main level, and each is it’s own little world. I preferred the larger of the three, which is set back from the beach but built up higher, meaning you can have a view of the water while you relax. The had lounge chairs on a small ledge of sorts lining the pool, meaning you can hang out in the water without actually being in the water. 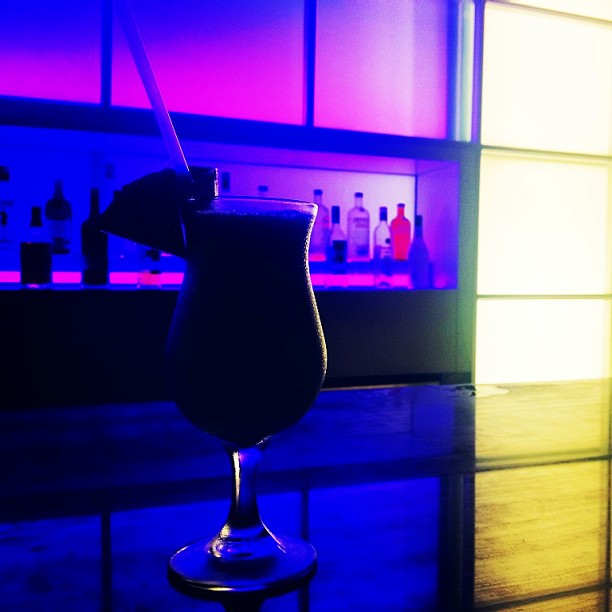 my choice? the piña coladas

Likewise, while I won’t wax on and on, the drinks are all-inclusive, which was great. And that includes premium, top-shelf liquors, just be sure to request it specifically at the bar, otherwise you’ll get the well. My favorite? The piña colada, of course.

Now, lets talk price. Rack rate is about $400 a night, which might seem like a lot, but I think it’s an unbeatable bargain. Let’s say half of that is the room, which means you’re getting three meals a day (or six, if you’re me..) and unlimited drinks, all for $200. Now the maths and I never really got along, but I think it breaks down rather nicely. And, it’s all taken care of. No messing around with currency exchange, or splitting bills with friends, or trying to figure out if you’re going over budget. You book your room, and it’s all set. Maybe it’s not the most budget friendly for a weeklong stay, but if you’re only going for a few days I think it’s a great way to go.

At Secrets the Vine it’s all about the details. The space has been thoroughly considered, the rooms are beautifully appointed, and the food is all top notch and carefully presented. Service is attentive, and as someone who really doesn’t like the in-your-face-sales-approach, I never once felt like I was being rushed or sold on something. It was more like being the guest in some very wealthy person’s house, and I’m not complaining about that.

In the spirit of full disclosure, I did get a press rate to stay here. But, I sought them out, and the reviews are definitely my own. Would I pay full rate to stay here? In a literal heartbeat — I’m already planning a return in May/June, and I couldn’t be more excited about it.