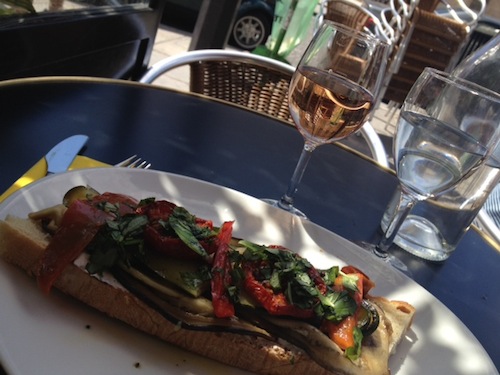 I don’t even know where to start with this one. Back in July I was lucky enough to get sent to Paris for work. For work! Who ever would’ve thought that would happen? I was camped out nearby Le Fumoir in the 1st Arrondissement, in a small, oh-so-Parisian hotel, with a room that had a balcony overlooking the Tuileries. Pretty much the dream life, non? But room service was actually from the restaurant next door, and while that might sound amazing, it just meant everything was ludicrously overpriced. And why would I eat in the room when I’m in Paris? That’s just silly.

So I made Le Fumoir my home kitchen for the time I was in Paris. Dreamy. For more description of the place, here’s my initial write up of Le Fumoir.

I’ve had practically everything on the menu by now, but I must say, my absolute favorite has become the tartine with goat cheese and mixed vegetables. We’re talking a delicious baguette cut in half and toasted, topped with a rich, creamy goat cheese that brings an incredible texture to the table, and pulls out the flavors of the eggplant, tomato, and zucchini that topped this “open faced sandwich.” Also, bonus points for the basil on top. Seriously though, I had this just about every day I was there.

Here’s the view from the terrace. Just, you know, the Louvre. No big deal.

One thing I learned that I’ll pass along to you — you can only order food if you sit on the front terrace. Who knew? My first day in the city I arrived slightly jet lagged and slightly in a daze, and took a seat on the side terrace. Sadly for me, the waitress informed me, I would have to move in order to get some actual dinner. Embarrassed after not understanding her when she had said that in French, I made my best effort at nonchalance and said it was fine and ordered the margarita of the day.

My first meal in Paris was thus bar nuts, olives, and a delicious raspberry margarita. Sometimes you just have to roll with things. And pick up a sandwich on the walk home.